School is under MID-DAY Meal Facility.

School is under MID-DAY Meal Facility.

1. Mid-Day Meal Scheme is used to serve to the students of Pre. Nursery to 8th

2. Hygienic M.D.M will be ensured for the students. The room of MDM will be maintained clean by MDM Incharge Mrs. Madhu Bala (Morning Shift) and Mr. Pardeep (Evening Shift)

The Mid-day Meal Scheme is the popular name for school meal programme in India. It involves provision of lunch free of cost to school-children on all working days. The key objectives of the programme are: protecting children from classroom hunger, increasing school enrolment and attendance, improved socialisation among children belonging to all castes, addressing malnutrition, and social empowerment through provision of employment to women

About the Mid Day Meal Scheme

Mid Day Meal in schools has had a long history in India. In 1925, a Mid Day Meal Programme was introduced for disadvantaged children in Madras Municipal Corporation. By the mid 1980s three States viz. Gujarat, Kerala and Tamil Nadu and the UT of Pondicherry had universalized a cooked Mid Day Meal Programme with their own resources for children studying at the primary stage By 1990-91 the number of States implementing the mid day meal programme with their own resources on a universal or a large scale had increased to twelve states.

1. With a view to enhancing enrollment, retention and attendance and simultaneously improving nutritional levels among children, the National Programme of Nutritional Support to Primary Education (NP-NSPE) was launched as a Centrally Sponsored Scheme on 15th August 1995, initially in 2408 blocks in the country. By the year 1997-98 the NP-NSPE was introduced in all blocks of the country. It was further extended in 2002 to cover not only children in classes I -V of Government, Government aided and local body schools, but also children studying in EGS and AIE centres. Central Assistance under the scheme consisted of free supply of food grains @ 100 grams per child per school day, and subsidy for transportation of food grains up to a maximum of Rs 50 per quintal. 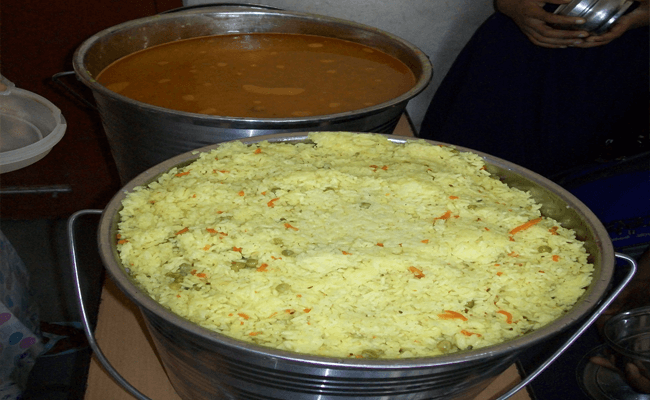 2. In September 2004 the scheme was revised to provide cooked mid day meal with 300 calories and 8-12 grams of protein to all children studying in classes I – V in Government and aided schools and EGS/ AIE centres. In addition to free supply of food grains, the revised scheme provided Central Assistance for (a) Cooking cost @ Re 1 per child per school day, (b) Transport subsidy was raised from the earlier maximum of Rs 50 per quintal to Rs. 100 per quintal for special category states, and Rs 75 per quintal for other states, (c) Management, monitoring and evaluation costs @ 2% of the cost of foodgrains, transport subsidy and cooking assistance, (d) Provision of mid day meal during summer vacation in drought affected areas.

4. In October 2007, the scheme has been further revised to cover children in upper primary (classes VI to VIII) initially in 3479 Educationally Backwards Blocks (EBBs). Around 1.7 crore upper primary children were included by this expansion of the scheme. From 2008-09 i.e w.e.f 1st April, 2008, the programme covers all children studying in Government, Local Body and Government-aided primary and upper primary schools and the EGS/AIE centres including Madarsa and Maqtabs supported under SSA of all areas across the country. The calorific value of a mid-day meal at upper primary stage has been fixed at a minimum of 700 calories and 20 grams of protein by providing 150 grams of food grains (rice/wheat) per child/school day.

5.From the year 2009 onwards the following changes have been made to improve the implementation of the scheme:-

b) Cooking cost (excluding the labour and administrative charges) has been revised from Rs.1.68 to to Rs. 2.50 for primary and from Rs. 2.20 to Rs. 3.75 for upper primary children from 1.12.2009 to facilitate serving meal to eligible children in prescribed quantity and of good quality .The cooking cost for primary is Rs. 2.69 per child per day and Rs. 4.03 for upper primary children from 1.4.2010.The cooking cost will be revised prior approval of competent authority by 7.5% every financial year from 1.4.2011.

c) The honorarium for cooks and helpers was paid from the labour and other administrative charges of Rs.0.40 per child per day provided under the cooking cost. In many cases the honorarium was so little that it became very difficult to engage manpower for cooking the meal. A Separate component for Payment of honorarium @ Rs.1000 per month per cook- cum-helper was introduced from 1.12.2009. Honorarium at the above prescribed rate is being paid to cook-cum-helper. However, in some of the states the honorarium to cook-cum-helpers are being paid more than Rs.1000/- through their state fund. Following norms for engagement of cook-cum-helper have been made:

d) A common unit cost of construction of kitchen shed @ Rs.60,000 for the whole country was impractical and also inadequate .Now the cost of construction of kitchen-cum-store will be determined on the basis of plinth area norm and State Schedule of Rates. The Department of School Education and Literacy vide letter No.1-1/2009-Desk(MDM) dated 31.12.2009 had prescribed 20 sq.mt. plinth area for schools having upto 100 children. For every additional upto 100 children additional 4 sq.mt plinth area will be added. States/UTs have the flexibility to modify the Slab of 100 children depending upon the local condition.

e) Due to difficult geographical terrain of the Special category States the transportation cost @ Rs.1.25 per quintal was not adequate to meet the actual cost of transportation of foodgrains from the FCI godowns to schools in these States. On the request of the North Eastern States the transportation assistance in the 11 Special Category States (Northern Eastern States, Himachal Pradesh, Jammu & Kashmir and Uttarakhand) have been made at par with the Public Distribution System (PDS) rates prevalent in these States with effect from 1.12.2009.